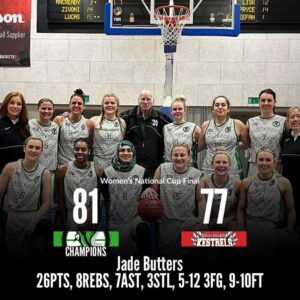 Not a script writer in the country could have written a believable story line to match the drama and the pulsating excitement that unfolded this afternoon, when Stockport lapwings lifted the national knockout cup after beating Solent kestrels following a spell of overtime, 81–77.
Having already knocked out the two top teams in division one in reaching the final, it seemed improbable that the lapwings could possibly turn over yet another team flying high in division one.
But as the fairy tale slowly ebbed and flowed so did the fortunes of the Stockport ream.
Quickly behind 8–15, The lapwings dug in and took a two point lead in to the second quarter.
Starting the second quarter with in the same mode Stockport pulled out an eleven point lead mid way through the period. As quick as they had moved ahead, just as quickly Solen responded to lead 40- 41 on the stroke of halftime.
At the start of the second half Stockport could not find the basket, mounting their score slowly from the free throw line adding only eight points in the quarter.
Scoring the first four points at the start of last ten minutes, and stretching their lead to ten points, Solent looked to have their hands on that treasured prize, the National Cup.
From an eleven point deficit, with the clock showing 3.13 minutes to play, Stockport dug deep yet again, deeper than they have ever dug before, they piled in the points at one end while their defence kept Solent to only two points, and scoring last as so many times before, the final buzzer sounded with the scores level at 67 all
At the start of the extra 5 minutes. Stockport quickly found them selves five points down. Once more the resilient never say die attitude surfaced once again, and pulling level at 72 all, and then 74 all with just two minutes left.
Stockport scored the next four points, and into the final 60 seconds still had a three point advantage. Two free throws from Captain Emma Macready, and a closing basket from Coach, and player of the match, Jade Bow Butters,who finished with 26 points, including 9 from 10 free throws, and at the right time the Lapwings were in pole position with a final score of 81-77.
The Lapwings added a little piece of history with this win, being only the second team ever from the second division to win the Cup , and only the second time the Lapwings have had their hands on the Trophy. The previous occasion was in the season 1983-84, and by an even narrower margin of three points.